← more from
Landslide Records
Get fresh music recommendations delivered to your inbox every Friday.
We've updated our Terms of Use. You can review the changes here. 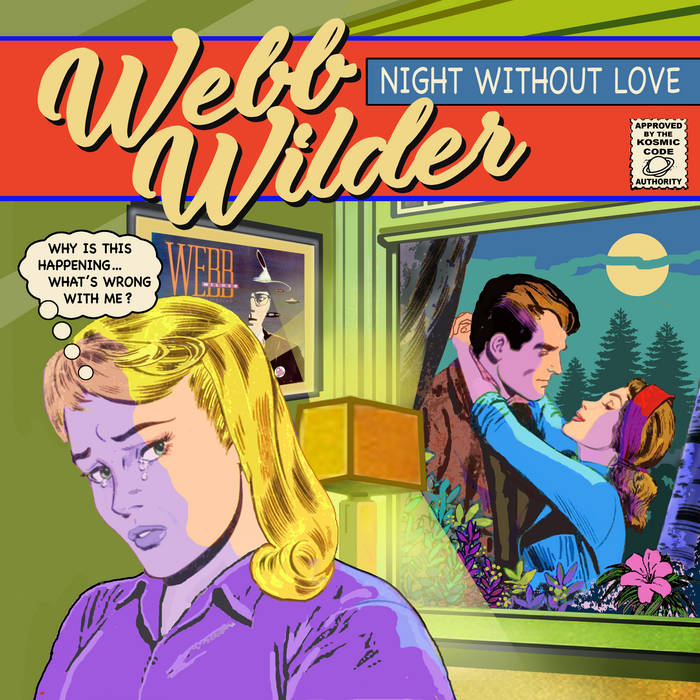 natureschild Been a Webb fan for 30 years or more, at least since the "Doodad" album. this is a very good (if kinda short) release. enjoy! Favorite track: Hi Heel Sneakers.

Former Mississippian, now current resident of Nashville, Webb Wilder has never been easily pigeonholed. And that’s the way he prefers it. Raised on classic rock and roll, spurred on by the Beatles, enamored by the Faces and the sounds that eventually gelled as Americana, he’s made music that breaks down the barriers by a refusal to be constrained by any particular parameters at all.


His latest effort, Night Without Love, not only provides another case in point, but also divvies up those distinct and diverse influences via his exceptional taste and talent. Yet, he still maintains a cohesive flow throughout. Equally divided between covers and originals, it finds Wilder sharing his enthusiasm, insight and intelligence, even while giving the material the reverence and respect it deserves.
Those sentiments are apparent even given a glance at the album cover, which conveys a vintage image all of its own. The concept was conceived and created by Flournoy Holmes, the man responsible for designing the iconic cover art for the Allman Brother’s Eat a Peach album. It affirms the record’s timeless pastiche with what appears to be the cover of a ‘50s graphic novel, a drawing of a spurned lover witnessing her boyfriend cheating with another woman.

Indeed, the album finds him coming full circle. “It kind of reflects everywhere I’ve been on my musical journey after high school,” Wilder reflects. “From the ‘70s forward.”
In fact, the title cut can be traced to a stint in an 1980s’ Texas combo called the Drapes. “It never wound up on a record,” Wilder says. “But I always wanted to do it. I always thought it would be a great title cut because it sounds like the title of a romance comic book. So I took it to Flournoy Holmes and he just ran with it.”


Likewise, he also revisits “Hit the Nail on the Head,” a song recorded by the Amazing Rhythm Aces and originally covered by the Ever Readies, another of Wilder’s early Austin outfits.
“I wanted to make an age appropriate album,” Wilders suggests. “But I didn’t want to play everything at breakneck speed to make it sound shallow. I think most of the songs sound pretty hopeful.”
That they do.  He taps the south of the border ballad “Be Still” by Los Lobos’ David Hidalgo, the Chip Taylor-composed/Stoney Edwards-covered “Holdin’ On To Myself,” the vintage rocker “Hi Heel Sneakers,” and, what could be considered one of the album’s many standouts,“Sweetheart Deal,” an enticing song co-composed with legendary songwriter Dan Penn, the man who wrote such classics as “Dark End of the Street,” “Cry Like a Baby,” and “Do Right Woman, Do Right Man,” among many others.

“I had been trying to get together with Dan for awhile,” Wilder recalls. “He was pretty slippery. So I went to see a gig he played at City Winery a couple of years ago, around the time of his 74th birthday. We had written together before and so when I saw him and asked him about writing again, he told to call him after the first of the year. So I did, and then he told me to call him on Valentine’s Day. Nobody but Dan would ever say something like that. But I did and I told him that would be a sweetheart deal. There are enough heartbreak songs. So when you have a hook like that, the song kind of writes itself.”


Here as always, Wilder’s reverence for his roots shines through. Likewise, he continues to avoid confining himself into any particular niche.

“The Beatles gave me license, and a lot of people license, to jumble things up,” he reflects. “If you look back, Jimmie Rodgers, Hank Williams, Elvis…they were all jumbling things up. They were pulling things out of the air that had been around before and then reinvented them to allow their own unique vision to come through. That’s always been my modus operandi. Sometimes your limitations can be your strengths. I could never sing high, so I’m not going to be Robert Plant in a Led Zeppelin cover band. I never could play real fast, so I’m not going to be Eric Clapton. But as a result of all those things, you find your own style. When Hank Williams came around, they thought he was pretty radical.”
Still, he admits that the lack of conformity and consistency clearly cost him his relationships with some record labels early on, and that he also got flack from some of his followers as well.


“It used to be that when you made an album, it had to have a slow song, it had to have a rocker and I just grew up thinking that,” he suggests. “I wanted to have integrity. I didn’t want to release something I wasn’t proud of. But by the time I started making albums, the record labels wanted to have ‘a sound.’ There was ZZ Top, the Georgia Satellites. There’s something to be said about those bands. It’s great to have a sound, but I was into this eclectic thing. Even when Americana first came around, I was too rock and roll for it.”
He says that he even ran into resistance from his fans early on. When It Came From Nashville, my first album came out, some people felt a little betrayed by the second album, which was Hybrid Vigor. With the first album we were doing more fifties. It wasn’t a rockabilly album, but we got branded as rockabilly. The second album had more Stones-is influences because we were trying to get the radio. It was a crunchier album. It’s been that way from then on.”
Obviously, the rejection wasn’t easy to accept.

“It was a heartbreaker,” he admits. “But this has always been my calling. I couldn’t have been someone else. I originally wanted to make money and be happy and be a business person, but I’m not that guy.”

Bandcamp Daily  your guide to the world of Bandcamp